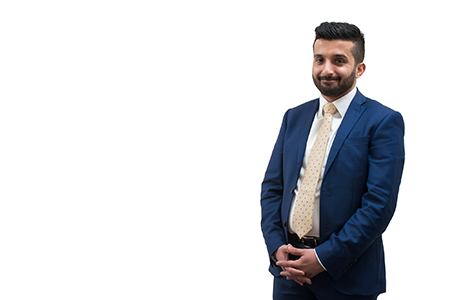 Summary:Maj joined the firm in May 2015 and has progressed to become a Trainee Solicitor currently placed in the Crown Court Department, Luton.

Maj’s first Crown Court assignment was to prepare and defend a £160 million pounds Receivables Banking Fraud prosecuted by the Serious Fraud Office. The trial was heard at Southwark Crown Court and lasted for 5 and a half months. Maj was in attendance daily at court and was sat behind one of the country’s leading Queen’s Counsel. Following the conclusion of the trial, Maj was immediately placed behind highly accomplished leading and junior counsel on a £9 million pound Boiler Room Fraud heard before Blackfriars Crown Court. This lasted for just over 3 months. Both cases gave Maj invaluable experience.

Maj has gone on to defend in the following type of cases:

Maj has also worked in the Magistrates Court Department in Northampton. During his time in Northampton, Maj’s case preparation was key in securing a number of acquittals in the magistrates courts.

Maj is also a fully accredited Police Station Representative and can travel nationwide to defend clients in the police station.

Maj works particularly well with Youth Defendants as he remembers all too well the folly of his own youth.

Outside of work Maj likes to keep fit but is also partial to the odd carb-binge.

Email to the Practice Manager in March 2018

“I just wanted to pass on to you what a fantastic job Crown Court Litigator Maj Hussain at your Luton Office has done on my young cousin’s case which is still pending for court.  The last four months have been quite stressful for all involved but despite numerous obstacles and [my cousin] not being forthcoming with the truth Maj has remained professional and helpful providing me with advice and information to ensure that Mitchell gets the best outcome.I can imagine that it’s a pretty thankless draining job that you all do but I am very grateful to Maj and your team for all the help and advice that has been given in such strenuous circumstances.”

Email to the Partners dated January 2019

St Albans Crown Court – R v MA – client charged with Kidnap and Blackmail. Sentencing Guidelines placed him at 6-8 years imprisonment if convicted. On the first day of trial the prosecution offered the lesser offence of Common Assault. The client pleaded guilty and left court with a £300 fine and his life back.

Luton Crown Court – R v JM – trial for burglary after client’s blood found on smashed window frame and inside a wall in the house. Client found NOT GUILTY.

St Albans Crown Court – R v GB – client charged with Section 18 GBH. After much negotiating outside of court the client was offered the lesser offence of Section 20 GBH. He pleaded guilty and received a Suspended Sentence, keeping him out of prison.